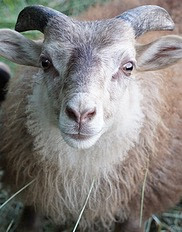 Meet "Cable", our new, and officially Registered, ram.  We're very happy with his ancestry- which, since he's registered, is all laid out to see.  Registered Icelandics are not cheap; which is why the Shuttleworth Flash Grant was needed to allow us to make this step- but; aside from providing really certain genetics, registering our animals in the future will basically double the value of animals we can offer for sale as breeding stock.  Our goals for our flock include developing the potential for them to add to farm income, directly as well as indirectly.

Yes, he is this year's lamb- but Icelandic ram lambs can be counted on to "function" fully in their first year.  We're picking him up in August, from Lydia's Flock, good careful breeders whose starting genetics were quite different from our own, but who also have a focus on Leadersheep, a sub-breed within Icelandic sheep that we definitely want.  You can learn about Leadersheep easily here, on the front page of Sunrise Sheep And Wool, another first rate Icelandic farm in Minnesota (but whose flock genetics are generally much closer to ours.)  We already have Leadersheep genetics in our flock.

Leadersheep were carefully maintained and bred in Iceland, apparently right from the beginning (1,000 years ago.) Basically, they did not have their wild intelligence entirely bred out of them.  Virtually all other sheep have been bred into proverbially non-intelligent creatures.  But Leadersheep notice the world around them, bring flocks in out of storms or if a wolf howls- and bond to their humans, helping with flock management.  We need that intelligence here; we depend on the flock to be sensible.  That doesn't mean they have human brains; they are sheep.  But they are not silly.  If you look at Cable's photo - you can see it; he's alert, aware, not timid- and interested in you.

When I first wanted to try sheep in the nut crops, Megan was not at all enthusiastic.  Her opinion of sheep, based on growing up on a ranch with thousands of commercial breed sheep, was that they are "wooly turnips."  It took a while- but- Megan is now an Icelandic sheep enthusiast.  They have personalities- at least our flock with some Leadersheep genes in all of them, certainly do.  And we've never lost an animal to coyotes; though they are abundant- and they know the flock is there.

We started our flock with animals that were registered, or registrable; good genetics.  But during the trial stages, we were not always meticulous about which ram was responsible for which lamb; for about 3/4 of the lambs we are sure of the sire, but...

Now; with the help of the Shuttleworth Foundation; we're upgrading; and we'll have the ability to keep rams and their ewes separate during the breeding season, so we'll know.  We'll have 3 great rams available this year; 2 registered and 1 registrable- and we know which ewes should go with which ram to block inbreeding.  At the moment, we're a little more inbred than I like; "line breeding" is a standard tool in animal breeding; but always carefully and with limits; we're at the limit, I think.

We do also have a few "excess" ram lambs- in case anyone is interested in a "grade" (non-registered) Icelandic ram with excellent genetics.  We have, I think 6 ram lambs; 2 of which we banded, as wethers, 4 of which looked so promising as breeding stock we did not castrate.  But we don't really need; or want; 4 more rams- we'd like to keep 1, probably, for future breeding.  The other 3 will likely be castrated later- unless- someone out there wants a ram...

We intend to get good pictures of the flock, including available ram lambs, before too long.  But they don't exactly stand still for their portraits...

Posted by Philip Rutter at 9:49 AM

from experimental status to permanent was made possible by a Shuttleworth Foundation Flash Grant- letting us purchase "enough" appropriate new electromesh fence to make moving the sheep through the nut plantings into a 1-2 person job; instead of having to use worn out not quite right cheap fence- and 6 people. Plus- moving our wonderful genetics back to "registered" status.
May seem like a small thing- but; it's huge. The Icelandic flock here replaces 2 diesel groundskeeping mowers and 2 workers clearing invading brush out of chestnut and hickory-pecan groves; and they cut the work of the periodic hazel coppice by perhaps 1/4, or more. It pays to have them here as partners.

Spring 2015; we're 2 rams, 2 wethers, 9 ewes, and 15 gorgeous lambs. We're expanding our flock; we need more sheep to mow all the nut crop ground. We don't expect to have meat lambs for a few years; but we do have more ram lambs than we can use, of course. We'll be making the best of those available for sale; non-registered prices this year. In future we plan to offer both registered and non-registered animals for sale; we think we have wonderful genetics going for folks interested in "integrated sheep". Come and SEE!